Foreword to Michael Tobias and Jane Gray Morrison: The Metaphysics of Protection 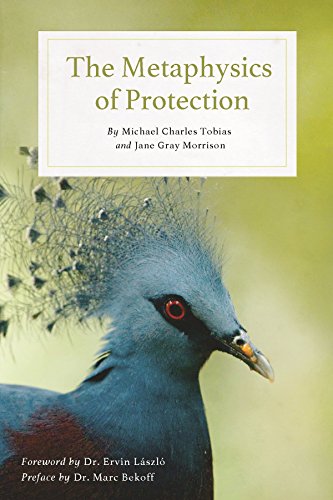 We are at a critical juncture in our history. We have been there before, but not as a species, and not as a crucial element in the history of life on the planet.  This is a time when it behooves us to take a moment to reflect on where we are, how we got here, and where we would be – and should be – going. Tobias and Morrison have undertaken such a reflection, and it is a precious resource for all of us. It prompts us to follow their lead.

A species that is conscious of itself and of its environment may be a great advance in the evolution of life, but it also poses a great risk. It would seem logical that a species that does not, need not, or possibly cannot reflect upon itself and its role in the scheme of things, also will not come to wrong conclusions about who or what it is and what its role is. Such a species – which could theoretically mean every living species on Earth, except the human – exists, it does not ask why it exists and how it should exist. The human species seems compelled and destined to ask these questions, whilst attempting to formulate answers to them. But these answers can be profoundly off the mark. Our species can set off on courses of action – trajectories of its evolution – that endanger not only itself, but its environment. And today the environment of the human species is nothing less than the whole web of life on the planet.

We have set off on a dangerous course because we have not asked ourselves the kind of questions this book asks. And because we have ignored that there are such questions to be asked, and that there can be answers to them. An advance into novelty, as philosopher Alfred North Whitehead termed the process of evolution, when unguided by conscious purpose is a high-risk proposition. This is all the more so for humankind. We act in light of our values and beliefs, and if these are mistaken, or simply obsolete, the risk of disaster hardens into certainty. The world is changing, and it is changing faster than our values and beliefs. Unreflective answers are likely to be outdated answers—dangerously wrong answers.

Yes, as Tobias and Morrison tell us, we need a metaphysics to orient ourselves. It has to be a “meta” physics because it has to penetrate beyond the physical plane in our world. Ours is not only a physical plus biological world, it is also a psychological world. We have brought these elements into the equations that define and determine our life and destiny, and we cannot spirit them away, nor can we afford to ignore them.

Einstein said with good reason that we cannot solve the problems that now face us with the same thinking that gave rise to them. The thinking that gave rise to them is still largely tribal thinking. But since the time tribal thinking first established itself in our collective psyche, the human tribe has grown to planetary dimensions. There is only one tribe now in the world, the tribe of living beings, embedded in the biosphere. We are a tribe embedded and entangled with all other living species and with the integral life-supporting systems of the planet.

Do we need a metaphysics of protection in this tribe? Yes we do: we need protection from ourselves. That is not the standard concept of protection, the concept of defending ourselves from things and people outside—from “the rest of the world.” The protection we need is  from unreflective action, from failing to ask the key questions and searching for answers to them. Answers that locate ourselves as members of the human tribe which, in turn, is a member of the tribe of all living things.

This book by Tobias and Morrison helps us protect ourselves from our unreflective selves. It must be digested, absorbed, and lived. Moving to this deep level of the metaphysics of protection is needed if the great experiment of the introduction of a conscious species in the symphony of life on the planet is not to end in discord and chaos. It need not do so: humanity is not only a danger to life but also a potential promoter of life.

Is it too soon to think of ourselves as the Conductor of the symphony of life on the planet? Clearly, we must first recognize ourselves as a member of the orchestra. Yet, we wield certain powers and influence the impact of which exceeds that of the other members. We may be a conscious member, able to comprehend the symphony. But do such powers grant us the right, and even impose the obligation, to be the first violinist? The one who ensures that the Conductor’s instructions are received by and followed by the rest of the orchestra? At face value, given the mysteries and unimaginable range of Earth’s biodiversity, this might strike as sheer arrogance by one, human, species.

There have been several candidates, self-proclaimed Conductors. One who deserves to fill this role is yet to appear. He or she must be one who knows the score, and is faithful to the intentions of the Composer. The Composer is Nature: the creator of the score that holds all life on Earth in the embrace of harmony. There is beauty, intent, and purpose in the score. It needs to be perceived, comprehended, and achieved. We, as allegedly first violinists, can and must play a central role in this complex equation of life. In absence of an obvious Conductor, the orchestra must conduct itself, which it has been doing quite magnificently for several billion years of life’s presence on this planet.