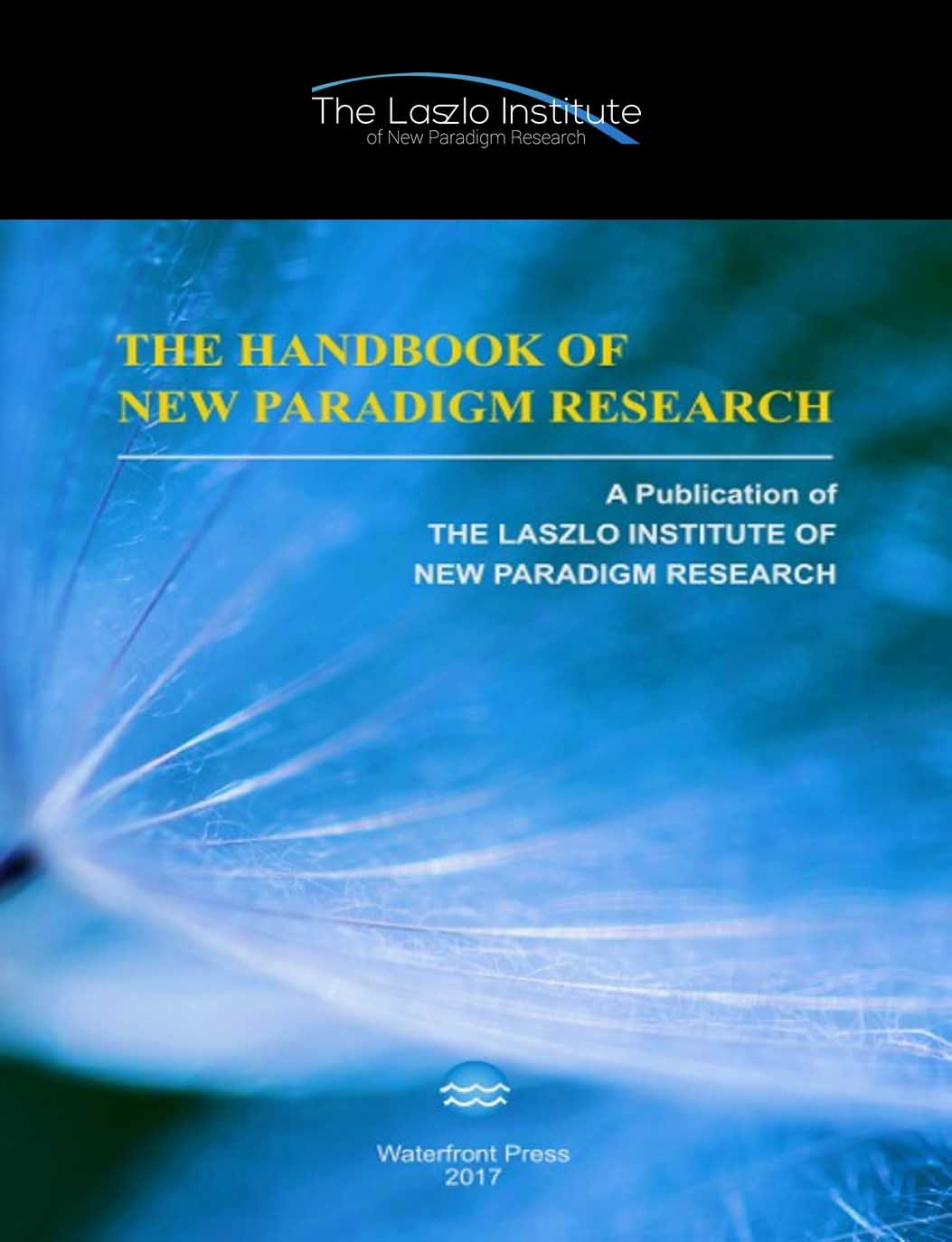 An institute dedicated to research on what it calls “the new paradigm” should make clear what it means by this term, and how it can be researched.

This handbook responds to this challenge. The Handbook of New Paradigm Research outlines in its first part the scheme that is the core of the new paradigm. This scheme responds to questions such as who we are, what the fundamental nature of the world is, and to where we are headed in these critical times.

The second part elaborates on the relevance of the scheme to fields and disciplines such as ecology, medicine and healing, education, politics and economics, and business.

The publication of this handbook is an invitation to its readers to collaborate with The Laszlo Institute of New Paradigm Research to elaborate on the new paradigm, and explore its application to the fields and questions that shape our life and our future.

An Institute dedicated to research on what it calls the “new paradigm” is morally as well as intellectually obliged to say what it means by this term. It is morally obliged to do so, because claiming that its work is of relevance to today’s world, it invites people to take notice of it, and if so motivated, to join it. And it is intellectually obliged because work on the new paradigm calls for collaboration with like-minded people to develop its tenets and applications. This Handbook is the Institute’s response to the challenge of meeting these obligations.

Developing such a paradigm is not only fascinating:  it is essential. The range of observed facts has been growing exponentially in recent years, but schemes that could tie them together have received scant attention. We have paradigms in physics and in biology, in psychology and in the social sciences, but we do not have a paradigm that would tie together the claims and findings of these discipline-bound fragmentary paradigms. Consequently we lack the insight and the overview that only an encompassing paradigm can provide.

The new paradigm must be encompassing, but it need not and must not repose on personal insight alone.  It must be sourced in the facts reported by the discipline-bound paradigms, and thus have a reliable basis in science. Yet it cannot be a mere integration of these facts. A paradigm is a fundamental worldview, and when it is consistent, that view is reflected in all its elements. A new paradigm is a new worldview, and when it is consistent, the new worldview is present in the interpretation of all the observed facts.

Philosophers have noted that observations do not themselves determine the meaning attached to them: every observation is capable of a variety of interpretations. In deciding the interpretation we attach to the facts, science is guided by the ideals of simplicity and comprehensiveness. The new-paradigm scheme must be as simple as possible—but not, as Einstein himself noted, simpler. It must also be as comprehensive as possible, tying together all of the facts that are relevant to its aims and concerns.

Seeking such a scheme is an ambitious, but not a quixotic, endeavor.  The world around us is not a random assembly of unrelated things and events—its coherence, as nearly all great thinkers and scientists in recent times have noted, is among its most astonishing features.  Searching for this coherence and building on it to gain a sound understanding of the world is a basic task of science and science-minded philosophy. It is the task of elaborating an optimally simple comprehensive scheme:  a new paradigm.

The first Part of this Handbook outlines the principal features of the optimally simple comprehensive scheme we suggest is the gist of the new paradigm.  This outline is not a full description of that scheme; it is an outline of its basic premises.  (More comprehensive treatments can be found in the publications of the Institute: the book series New Paradigm Books [Select Books, New York], and the periodical World Futures: The Journal of New Paradigm Research [Routledge, Philadelphia and London].)  The second Part of the Handbook elaborates the relevance of the scheme to the major fields and disciplines of the contemporary world: medicine and healing, education, politics, economics, and business. The application of the new paradigm to these disciplines interrelates their conceptual schemes in a consistent and embracing interpretation of the facts that come to light in their given fields.

This undertaking is ambitious, and inherently feasible, but it is not and cannot be dogmatic. Certainty is reserved for the theorems of logic and mathematics; statements become uncertain to the extent that they refer to the real world.  Such statements, Plato said, are but likely stories. Hence this assessment of the new paradigm does not aspire to certainty, but it does aspire to be a basis for the likeliest story we can now tell.  The task of the Institute of New Paradigm Research is to research, elaborate, and articulate that story. This is basic research in the truest sense of the term, and it is necessarily interdisciplinary: it builds on facts and findings coming from a variety of fields and disciplines. The publication of this Handbook is an invitation to interested readers to collaborate in the elaboration of the new paradigm, and in the exploration of its application to the principal fields of scientific and human interest.

I. PREMISES OF THE NEW PARADIGM

II. APPLICATIONS OF THE NEW PARADIGM

The New Paradigm in the Sciences of Life

The New Paradigm in Medicine

The New Paradigm in Education

The New Paradigm in Politics

The New Paradigm in Economics

The New Paradigm in Business

III. IMPLICATIONS FOR TODAY AND TOMORROW

The New Paradigm and the Mind of the Next Generation

CURRENT PROJECTS OF THE INSTITUTE

PUBLICATIONS OF THE INSTITUTE

BIOGRAPHIES OF THE CO-AUTHORS

Lawrence Bloom is Secretary General of the Be Earth Foundation, and Chairman of the Dakia Institute and Be Energy Group.

Kingsley L. Dennis, author of numerous books including The Phoenix Generation, New Consciousness for a New World, is Publications Director of the Laszlo Institute.

Shamik Desai is Director of Research and Chief Financial Officer of the Laszlo Institute.

Garry Jacobs author of numerous books and articles, is CEO of the World Academy of Art & Science; Chairman of the Board and CEO of the World University Consortium, Managing Editor of the journal Cadmus, Vice-President of The Mother’s Service Society, and a member of the Club of Rome.

Dawna Jones is founder of From Insight to Action, and author of Decision Making for Dummies.

Alexander Laszlo, author of various journal, book, and encyclopedia publications, is Director of the Doctoral Program in Leadership and Systemic Innovation at the Buenos Aires Institute of Technology (ITBA).

Christopher Laszlo, author of books and articles on sustainable management, is the Char and Chuck Fowler Professor of Organizational Behavior and Executive Director of the Fowler Center for Business as an Agent of World Benefit at Case Western Reserve University.

Maria Sagi, author or co-author of eleven books and numerous articles on global problems and new-paradigm healing, is Science Director of the Club of Budapest.

Julene Siddique, author of The Odyssey Musical Theatre, is founder of the “Spectrum” method of education, and creator of “Harmonic Therapies” integrating creative therapies with TimeWaver information field devices. 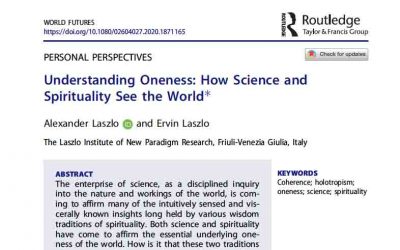 Understanding Oneness: How Science and Spirituality See the World

The enterprise of science, as a disciplined inquiry into the nature and workings of the world, is coming to affirm many of the intuitively sensed and viscerally known insights long held by various wisdom traditions of spirituality. 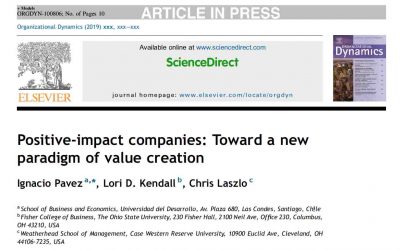 By Ignacio Pavez, Lori D. Kendall, Chris Laszlo. The increasingly visible effects of climate change, the degradation of ecological systems, growing income inequality, and high levels of stress and disengagement in the workplace have dramatically increased corporate awareness of the need for integrating sustainability into business strategy. However, the focus of this awareness has largely emphasized finding ways to reduce the firm’s harmful impact from “bad” to “less bad” (e.g., when a company cuts its CO2 emissions by 50%). While this helps firms be less unsustainable, it diverts their focus from creating a more flourishing world, a place where people everywhere live in healthy communities, prosper, and can live life to the fullest. We propose that it is time for leaders to shift their thinking, and for companies to refocus their efforts, from reducing harm to making a positive impact, which we define as increasing economic prosperity while contributing to a healthy regenerative natural environment and improving human well-being. 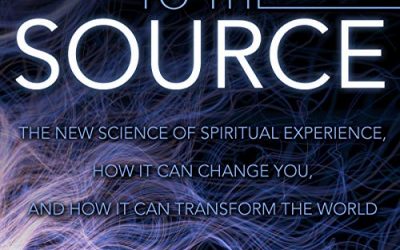 RECONNECTING TO THE SOURCE AUDIOBOOK

Reconnecting to the Source is a powerful new book on the science of spiritual experience by Dr. Ervin Laszlo. A well-known figure in the fields of new science, consciousness, and spirituality, Dr. Laszlo has inspired some of today’s most important figures in science and philosophy. In Reconnecting to the Source he unpacks the science behind spiritual experience, investigating the ways in which we can access realms of experience beyond the everyday. It is in these moments, when our conscious minds are in contact or perhaps even overridden by our unconscious selves, that we can explore the depths of spiritual meaning. 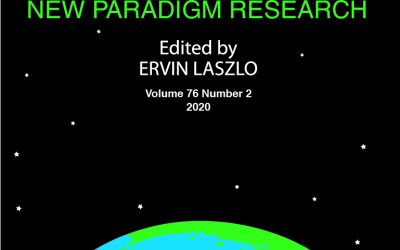 World Futures: The Journal of New Paradigm Research provides a venue for leading edge, creative, transdisciplinary contributions. It encourages the application of new ways of thinking and approaches that draw on the intersection of the natural sciences, the social sciences, and the humanities. 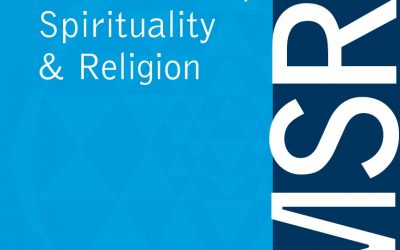 Quantum Management: The Practices and Science of Flourishing Enterprise in the Journal of Management, Spirituality & Religion (JMSR) – February 24, 2020
by Chris Laszlo (Author)

The paper addresses the following questions:

What is Quantum Management and why is it needed for New Paradigm applications in business?
What are its foundations in theoretical and applied science? For example, how do the Double-Slit and Bell Theorem experiments in quantum physics offer important insights for managers?
How can experiential practices of connectedness, also referred to as direct-intuitive practices, elevate a person’s consciousness? Why is transforming consciousness the highest point of leverage for scaling positive impact businesses? 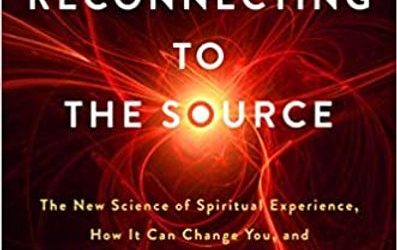 RECONNECTING TO THE SOURCE

Reconnecting to the Source: The New Science of Spiritual Experience, How It Can Change You, and How It Can Transform the World, Audiobook, Audio CD, Kindle & Paperback – March 24, 2020
by Ervin Laszlo (Author), Deepak Chopra (Foreword, Introduction) on St. Martin’s Essentials

RECONNECTING TO THE SOURCE: The New Science of Spiritual Experience, How It Can Change You, and How It Can Transform the World (St. Martin’s Essentials; March 24, 2020) is a powerful new book by ERVIN LASZLO on the science of spiritual experience as a way to our collective salvation. An internationally celebrated figure in the fields of new science, consciousness, and spirituality, Dr. Laszlo presents with this book a groundbreaking message of both theoretical and practical importance. 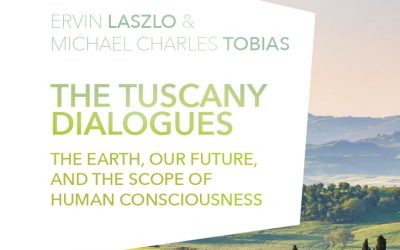 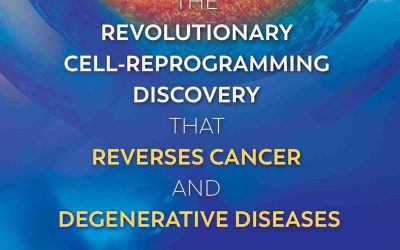 A look at the future of medicine based on cutting-edge stem cell research.
In this book, Pier Mario Biava, M.D., and Ervin Laszlo, Ph.D., show how this “information” worldview can be applied to healing and medicine and, specifically, how it underlies a revolutionary new approach to cancer and disease treatment, one that works directly with the epigenetic code–the information that programs the function and growth of every living cell. 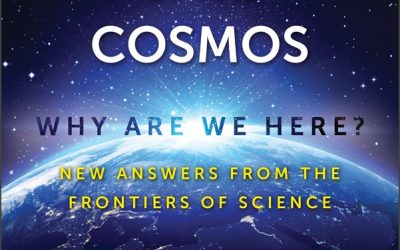 The Intelligence of the Cosmos: Why Are We Here?

From the cutting edge of science and living spirituality: a guide to understanding our identity and purpose in the world. 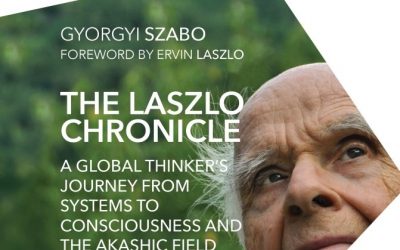