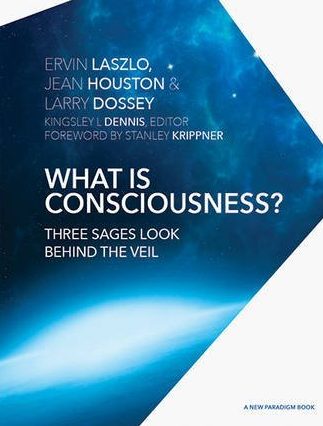 What is Consciousness? Three Sages Look Behind the Veil (A New Paradigm Book) Kindle & Hardcover – March 15, 2016

What is consciousness? Conventional thinking tells us it is the images, sensations, thoughts, and feelings produced by the brain. When the neurons in the brain stop firing, consciousness ceases to be. But does it?

Dr. Ervin Laszlo is generally recognized as the founder of systems philosophy and general evolution theory. His work in recent years has centered on the formulation and development of the Akasha Paradigm, the new conception of cosmos, life and consciousness emerging at the forefront of the contemporary sciences.

He serves as President of the Club of Budapest, Chairman of the Ervin Laszlo Institute for Advanced Study (ELIAS), Chancellor of the Giordano Bruno GlobalShift University, and Editor of World Futures: The Journal of New Paradigm Research.

He is recipient of the highest degree in philosophy and human sciences from the Sorbonne, the University of Paris, as well as of the coveted Artist Diploma of the Liszt Ferenc Academy of Music in Budapest. Additional prizes and awards include four honorary doctorates. His appointments have included research grants at Yale and Princeton Universities, professorships for philosophy, systems sciences, and future sciences at the Universities of Houston, Portland State, and Indiana, as well as Northwestern University and the State University of New York.

His career also included guest professorships at various universities in Europe and the Far East. In addition, he worked as program director for the United Nations Institute for Training and Research (UNITAR). In 1999 he was was awarded an honorary doctorate by the Canadian International Institute of Advanced Studies in Systems Research and Cybernetics.

Jean Houston, Ph.D., scholar, philosopher and researcher in Human Capacities, is one of the foremost visionary thinkers and doers of our time. She is long regarded as one of the principal founders of the Human Potential Movement. Dr. Houston is noted for her ability to combine a deep knowledge of history, culture, new science, spirituality and human development into her teaching. She is known for her inter-disciplinary perspective delivered in inspirational and humorous keynote addresses. A prolific writer, Dr. Houston is the author of 26 books including Jump Time, A Passion for the Possible, The Search for the Beloved, Life Force, The Possible Human, Public Like a Frog, A Mythic Life: Learning to Live Our Greater Story, and Manual of the Peacemaker. As Advisor to UNICEF in human and cultural development, she has worked around the world helping to implement some of their extensive educational programs.

Larry Dossey, M.D., this distinguished Texas physician, deeply rooted in the scientific world, has become an internationally influential advocate of the role of the mind in health and the role of spirituality in healthcare. Bringing the experience of a practicing internist and the soul of a poet to the discourse, Dr. Larry Dossey offers panoramic insight into the nature and the future of medicine. Upon graduating with honors from the University of Texas at Austin, Dr. Dossey worked as a pharmacist while earning his M.D. degree from Southwestern Medical School in Dallas, 1967. Before completing his residency in internal medicine, he served as a battalion surgeon in Vietnam, where he was decorated for valor. Dr. Dossey helped establish the Dallas Diagnostic Association, the largest group of internal medicine practitioners in that city, and was Chief of Staff of Medical City Dallas Hospital in 1982. The author of twelve books and numerous articles, Dr. Dossey is the former Executive Editor of the peer-reviewed journal Alternative Therapies in Health and Medicine, the most widely subscribed-to journal in its field.