The New Paradigm Research Program combines applied research, action-research and transdisciplinary research methodologies.  New Paradigm Research explores the domain of full-spectrum enquiry into the nature of manifest reality, drawing upon intellectually robust, academically rigorous, and pragmatically relevant methods of research.  These are grounded in the tradition of science by being independently testable, replicable, and accessible without recourse to esoterica while at the same time being open to evidence not necessarily derived from empirical, positivistic, or reductionistic approaches.

The spirit of New Paradigm Research fosters whole system engagement with manifest reality and the substructures that underlie it, promoting transdisciplinarity and the capability to use the full range of human meaning-making capacity to explore and make sense of our world.

The principal Research Areas of the Laszlo Institute

New Paradigm Science is the core domain of the Laszlo Institute.  It is dedicated to exploring integral, transdisciplinary, and what we call “holotropic” (coherence and wholeness oriented) explanatory frameworks of phenomena and events.  Explorations in New Paradigm Science invite both theoretical analyses relating to the principles and constructs of emerging epistemological considerations, as well as presentation of explorations and practical applications that foster new perspectives on ontological engagements.

The sub-domain of Quantum Physics and Quantum Biology explores the phenomenon of entanglement and mutual cuasality in the physical and life sciences.

The change of paradigm brought about by exploration of the quantum domain has pushed the edges of the paradigm of originally framed as quantum mechanics.  The sub-domain of Field-Based Physics explores both the mounting experimental evidence for the dematerialization the world while also formulating novel theoretical frameworks that account for the observed dynamics of consonance.

New Paradigm Policy Sciences covers the area of collective self-determination at all levels of societal organization.  Increasing evidence for and recognition of the interdependence of human decision making structures suggests a fundamentally fractal ontology of relational forms.  This area explores the policy implications of this new landscape of relational forms and the profound implications it holds for the evolutionary guidance function of our species.

The macro-political issues of Public Governance Policy are concerned with themes of societal development and participation in the narrative of the management of our collective presence on Earth.  From issues of the governance of the collective commons to those of civic participation, this area explores how the emerging understanding of the interdependence of being, the interrelation of decisions, and the interpenetration thoughts and actions that evoke a new panorama for the informed self-determination of our species.

The micro-political issues of Private Enterprise Policy are concerned with the creation of viable organizational forms and, beyond that, with how such forms express an underlying narrative of wealth creation.  Inquiry in this research domain is dedicated to exploring the emerging understanding of subtle connections that bind organizational behavior and inform policy decision taking at the enterprise level.

The research area of New Paradigm Business explores the principles and practices that inform conscious business practice in the 21st century.  New domains of business knowledge and practice are considered in ways that move progressively out from an understanding of the workings of the firm, to that of the industry, to that of society, to that of living ecosystemic contexts, to that of the integral health and wellbeing of our planet, to that of the quantum realm and the subtle connections of entanglement, to that of consciousness and sentience as non-local and transtemporal information fields that stand to inform business.

The subdomain of research into Quantum Leadership and Impact addresses how insights from quantum physics, quantum consciousness and computational technology provide guidance for the holistic, systemic, integral and collective intelligence potential of organization leadership and development.

Systemic Innovation provides a research focus on systems of shared solutions that emerge from the collective intelligence of innovation leaders and designers that are both globally informed and locally relevant in their application.  Research includes exploration of new methods, models and means of emerging innovation ecologies of socio-technical solutions that are mutually synergetic. Systemic innovation incorporates social values, technological creativity, economic opportunity and environmental integrity informed by a systemic understanding the dynamics of collective creativity and processes of interdependent emergence.

The research area of New Paradigm Medicine draws on perennial wellness traditions and understandings of holistic and integral health while at the same time integrating insights from quantum biology and living ecosystems.  Exploration focuses on the dynamics of homeostasis, homeodynamics, and meta-stability in maintaining and evolving health and wellbeing.

The subdomain of Holistic Approaches to Health and Wellbeing explores contemporary as well as traditional approaches to whole systems health.  This includes all dimensions of human meta-stability, from the bio-physical to the psycho-emotional and the socio-behavioral.  It also includes exploration of collective wellbeing and fitness.

Through the exploration of Alternative Methodologies and Approaches to health and wellbeing, research in this area contributes to contemporary understanding of full-spectrum health.  Special attention is given to methodologies and approaches that integrate perennial wisdom traditions with contemporary understanding of health, healing and curative practices in the life sciences.

The area of Systemic and Holistic Learning approaches considers trends and conceptions that promote multicultural, transdisciplinary and immersive learning rather than the standard teaching of traditional materials in classroom settings. Research includes curriculum-development and the practical application of emerging conceptions in beyond-the-school real-world settings.

Evolutionary Learning Communities learn how to learn in harmony with the dynamics of their evolving environment.  When two or more such communities embark on a shared learning path for the joint creation of meaning, an Evolutionary Learning Ecosystem emerges.  The collective intelligence harnessed in such engagements offers new horizons for individual and collective learning dynamics.  Approaches and methodologies that foster the emergence of these systems of collective learning form the focus of this research area.

New Paradigm Spirituality encompasses exploration of ways of knowing, sensing and being that source information from the deep dimensions of the cosmos.  Through approaches to the mystery of existence, it encompasses experimentation and evidence based study concerned with a larger narrative of existence that includes and transcends the human lifetime.

Exploration into Perennial Wisdom Traditions and Contemporary Challenges involves consideration of the lessons to be learned and applied from the teachings, rituals and customs of autochthonous peoples from both past and present in addressing the pressing needs of humanity, our relationship with each other and our role in the web of life.

Through the exploration of Emerging Cosmovisions, Wetanschauungen, and Origin Myths, research in this area stands to emerge a new mythos for humanity.  The need to transcend contemporary myths that celebrate the lone hero and reward strident individualism is a matter of collective self-interest.  By exploring the mental models, cognitive maps and worldviews that harmonize human presence on Earth, this research offers pathways to reunite humanity with the co-creative dynamics of our living planet.

Studies in New Paradigm Sentience and Consciousness consider states of prehension, awareness, reflection, sense-making, and experiential being that can be expressed and communicated in some form.  These states may be individual, collective, transpersonal, non-human or pan-cosmic.  They may also derive from first-person life experiences (phenomenological research) or from historical, diachronic or longitudinal study.

Cosmic Consciousness studies consider topics such as cosmic mind, the Zero Point energy Field (ZPF), the quantum plenum, the Akashic field or A-Field, the ether, the implicate order, and morphogenic fields.  They also consider expressions of consciousness in the non-living domains of existence.

The Journal of New Paradigm Research

Publishes research aimed at developing the new paradigm of cosmos, life, consciousness and society emerging at the cutting edge of contemporary research. 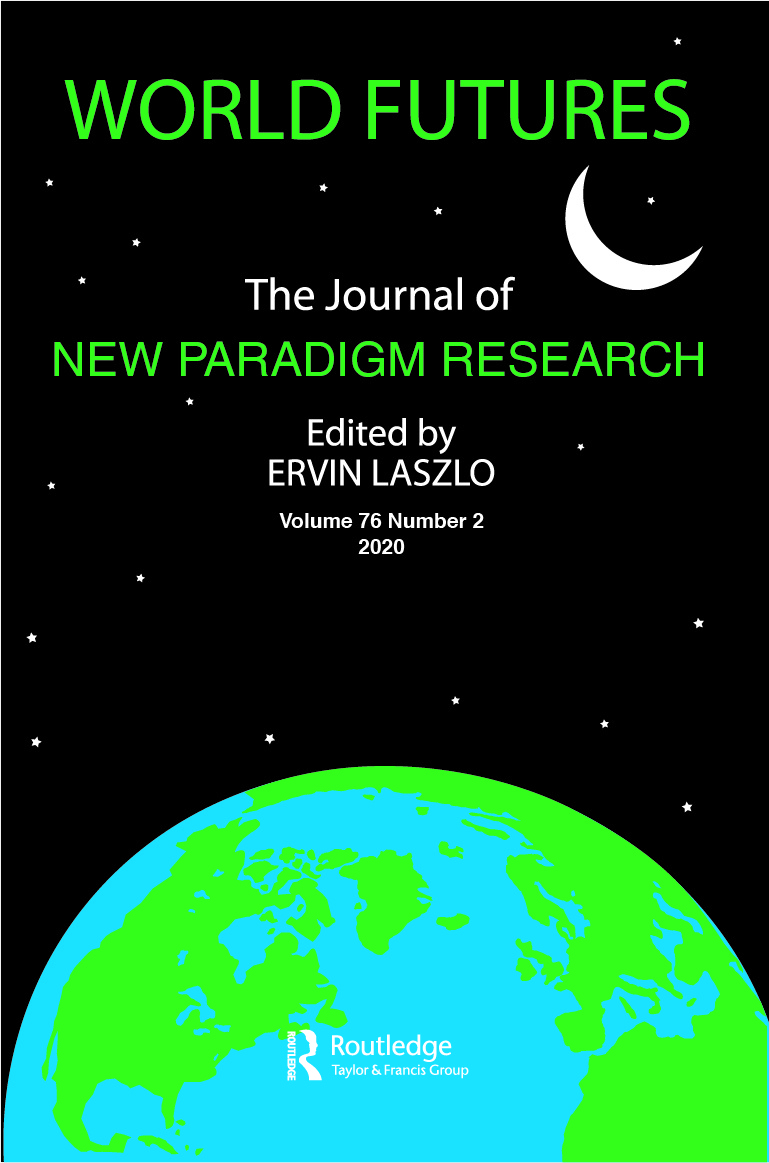